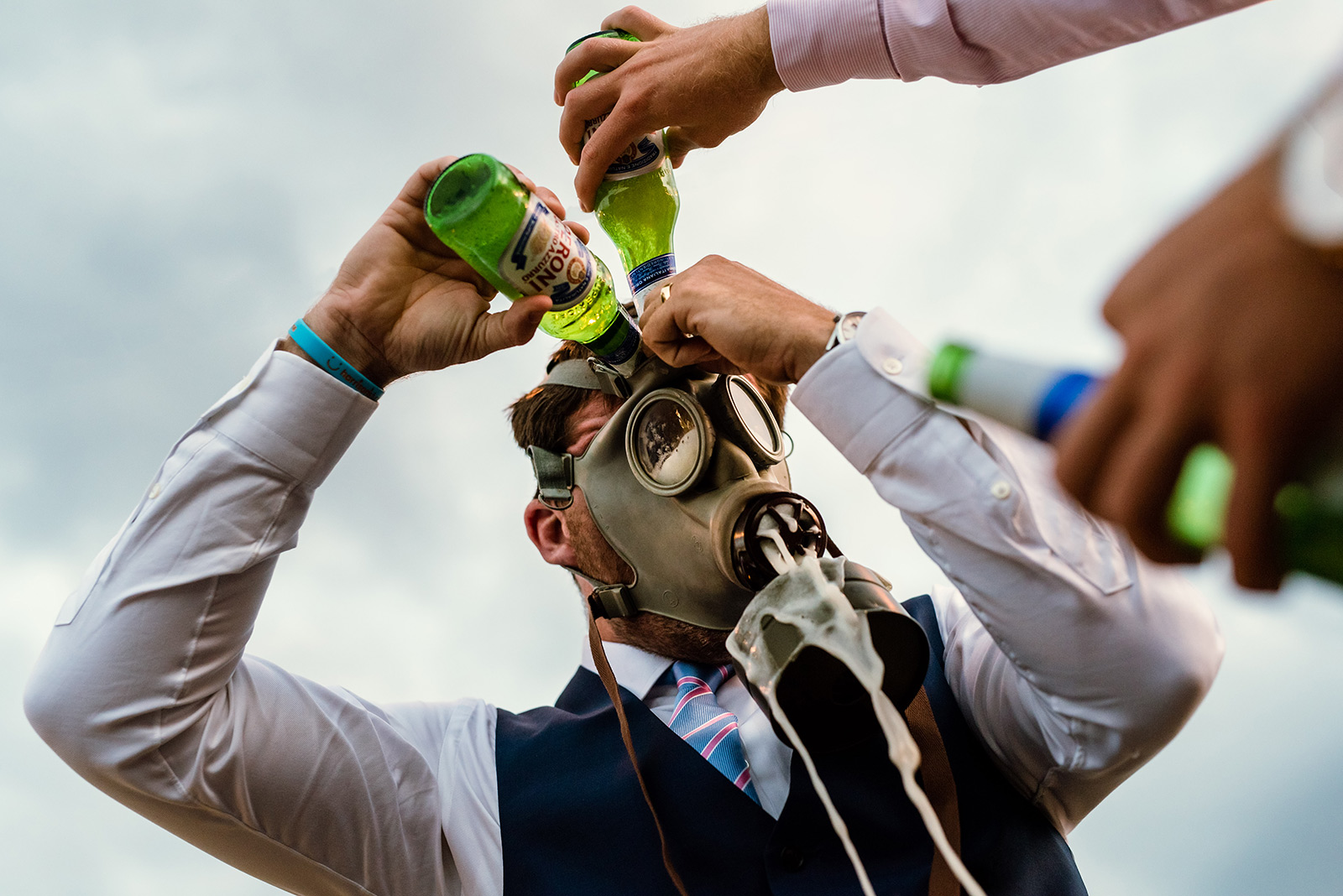 An amazing way to start 2019, a Fearless Photographers Award!

2018 has to be one of the most humbling years to date in my career as a professional wedding photographer. With so many incredibly talented photographers in the UK, getting bookings is harder due to the vast options available to couples getting married. I’m lucky to shoot many amazing weddings around Europe and so incredibly lucky to do what I love, capturing wonderful moments for my couples with my own creative vision, and a bucket full of luck thrown in for good measure.

The guy in the gas mask is Dan, a legend among his peers. He’s part of a Hong Kong Pro Rugby team, most of his teammates were over for his Tipi Wedding in the UK last summer. The wedding breakfast had just finished, there were kids messing around doing the floss the dance floor, as they do. I was setting up my lighting getting ready for the first dance and getting my exposures dialed in ready for the ‘mental’ part of the wedding; the speeches, cake cutting and first dance all happening in quick succession was about to start, it’s good to be ready, especially when each aspect has to be lit individually.

I’m always conscience and try and be aware of what’s happening around me, I noticed Dan being dragged outside by his mates, what made me grab my camera and run was that he was carrying what appeared to be a gas mask, this looks interesting!

So I picked up my camera and ran over to where they were gathering. As soon as I arrived the mask was already on his head and beers were being poured, WTF was going on? I had a 50mm prime on the camera and got low and took around 20 frames and within 10 secs the moment was gone.

Dan almost drowned in beer, everyone was laughing so hard I could hardly see straight. One regret is that I didn’t have a wider lens to get more of the guys and get something more environmental, but knowing how I crop images, I would probably have cropped it tight in post. But I had to use what I had and got lucky going tight. 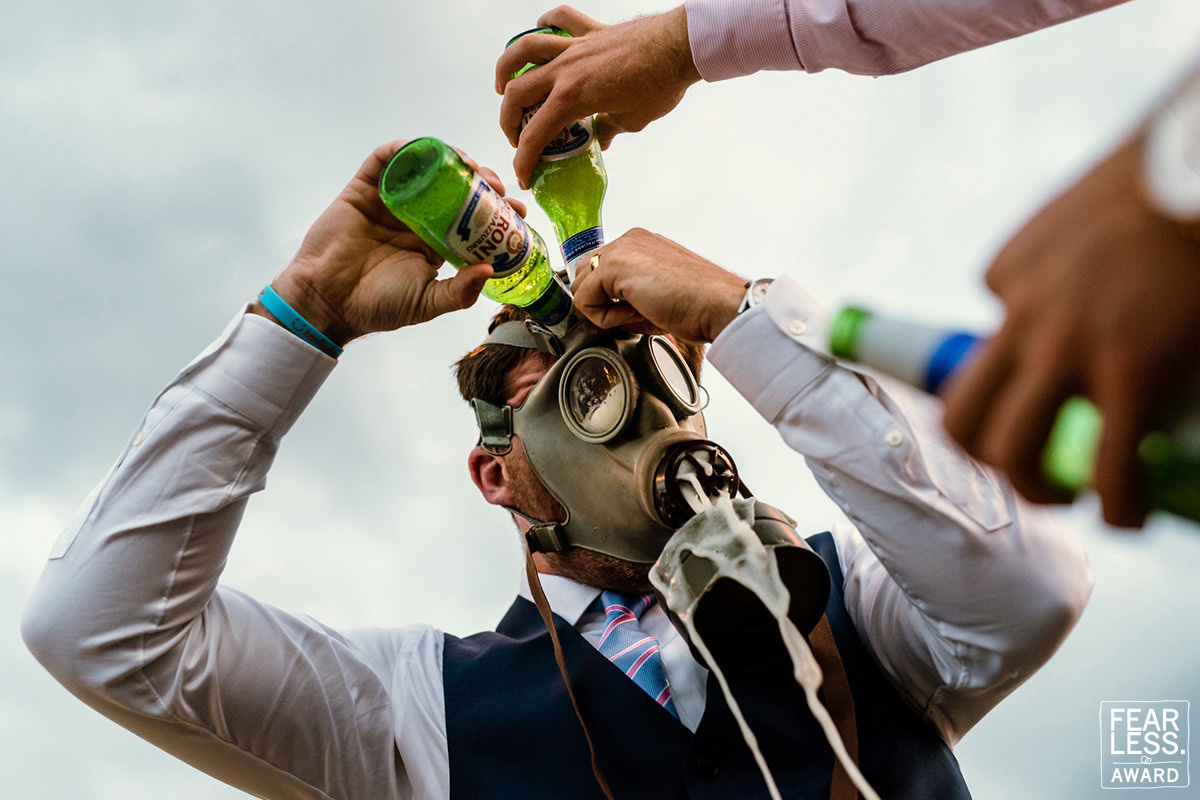 I’m also delighted to pick up an honorable mention in the same round. An honourable Mention is a photo that still scored very well but just fell short of getting an award.

The shot from Angela and Steve’s Cambridge wedding was taken when they got ready together at their home in St Ives. It was in a small bedroom with literally no available light, just the make up and bathroom lights offering some focal points. I was initially getting a shot of Angela and her dress which was hanging up in the window. Steve then walked into the bathroom and put his tie on and I was shooting the crap out this moment when everything lined up perfectly. Luckily I had my 24-70 2.8 and I was able to go wide and get the frame without moving. 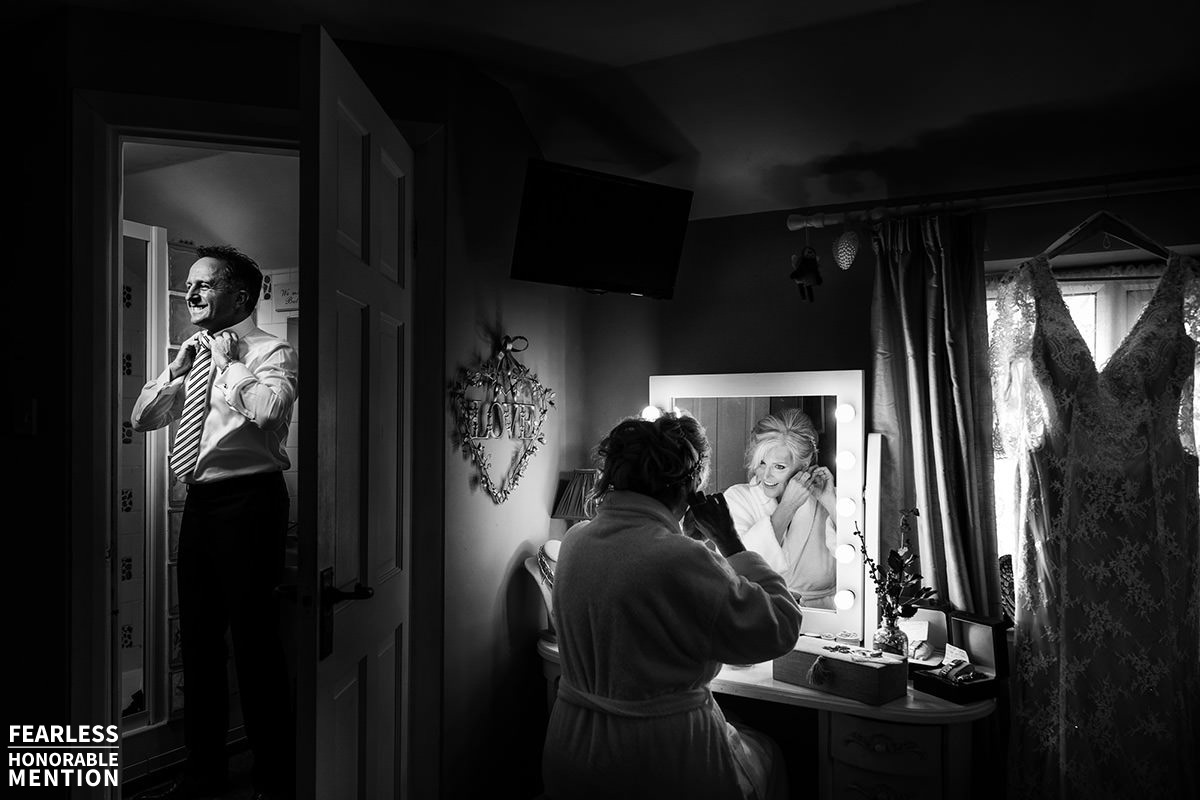 Thanks to Huy and all the curators for selecting a fabulous set of Award-winning images in Round 46. Still cannot believe I’m among the winners.